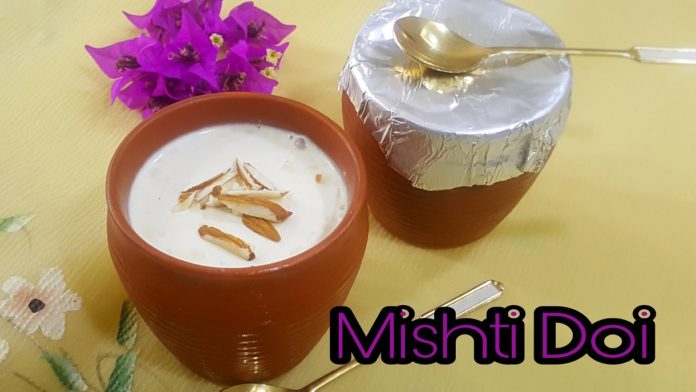 Mishti Doi is a popular Bengali dessert. Nolen Gurer Mishti Doi  is a fermented sweet yoghurt made with milk and nolen gurer. Nolen Gurer is a special jaggery obtained from date palm trees. It is available in Kolkata in winter. Nolen Gur is an intrinsic  part of Bengali cuisine in winters.   Various sweets such as Nolen gur sandesh, Nolen gur rasgulla, Nolen gur Payesh is made during winters in Kolkata. Recently, one of my friends who visited Kolkata brought Nolen gur for me. That’s when i decided to make Mishti Doi with Nolen gurer which is the most easiest dessert of Bengali cuisine.

It’s a simple dessert which does not  involve elaborate procedure.  Here’s the recipe:

Another famous dish from the Bengali cuisine is Begun Bhaja. Do have a look at the recipe of Begun Bhaja.

ABOUT US
Vanita's Corner is about simple food recipes and gardening ideas. Turn to this blog to add variety to your everyday cooking and to try your hand at gardening.
Contact us: vanitascorner@gmail.com
FOLLOW US
© All content on this website is owned by Vanita's Corner. All Rights Reserved.
error: Content is protected !!